I am a racist

The University of Alabama’s student newspaper has been forced to apologize after printing a profoundly disturbing, offensive, racist political cartoon about the president. Here’s the cartoon [Warning: NSFW]: 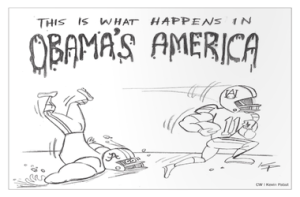 The students of UA — leaders of the future, the greatest young minds in the country, the best and the brightest — were driven to the edge of rebellion by this sick and twisted, racially motivated attack against the Greatest President to Ever Preside Over Any Country Anywhere at Any Point Ever.

Here’s just one of the hundreds of angry comments that poured in after this horrible hate crime cartoon was published:

“I am completely and utterly disgusted with The University of Alabama. No matter where you stand with your beliefs and how much you disagree with his decisions, [Obama] has EARNED his position in office and deserves the respect that all of the past presidents received. Ask yourself, what does this say about The University of Alabama? I can tell you what my peers and fellow classmates think it is, racism.”

This woman, a student who apparently passed high school and gained acceptance to a large American university, just made the claim that no other president has ever been subjected to criticism and mockery. And she is, of course, absolutely correct. We’ve had white presidents murdered while in office, but even they never had to endure the unspeakable horrors of satirical cartoons and lighthearted parodies. We’ve had a president impeached and a president forced to resign. Our most recent white president was mocked so regularly that Comedy Central actually made a sitcom entirely devoted to making fun of him. Yet none of these had to deal with the sort of anger and hostility directed at Obama. Obama stands alone in that regard. Lincoln and JFK are looking on from the grave, thinking, “man, that guy has it rough.”

Now, you may see this image and think two things: 1) It’s actually making fun of Obama’s critics, not Obama himself. 2) Even if it did make fun of Obama, there is absolutely nothing racial about it.

You may think such things — if you’re a racist.

I used to imagine that it was possible to make substantive critiques of Obama’s policies without necessarily being a slobbering white supremacist. But I’ve finally been forced to face the ugly truth. After all, it’s a widely held belief on college campuses that all criticism of Obama stems from racial bias. This means that either they’re right, or our higher academic institutions are filled to the brim with mush-brained, dimwitted morons who possess the critical thinking skills of developmentally delayed toddlers. If the latter is true, we are doomed. We must flee into the woods before our civilization is destroyed by the Walking Dumb. I can not accept such a horrible vision of the future, so I choose to believe option one: they are right.

And, by that equation, I have been guilty of racism. God forgive me. I thought I just specifically disliked one particular black man named Barack Obama for very valid reasons, but, it turns out, you can not oppose one black politician without opposing all black people. Oh Lord, I am a Klansman. I thought my feelings were driven by my intense ideological belief in small government, fiscal and social conservatism, as well as a general distaste for dishonesty and corruption, but, in fact, it is all rooted in my underlying hatred for minorities. I am so ashamed. I didn’t even know that I hated minorities until a bunch of college students and MSNBC hosts brought my attention to the fact.

I got into an argument with a white liberal a few days ago. He insisted that I could “never bring myself to support any black public figure.” I retorted that there are plenty of black public figures who I do support. I mentioned Ben Carson, Thomas Sowell, Clarence Thomas, and Alan Keyes, as four examples. The white guy then informed me that those four “don’t count.” I’m still learning how this works, so, at first, I thought it was the pinnacle of racism for some pretentious white liberal to authoritatively decree that these educated, accomplished, distinguished black gentleman “don’t count” as black. He stripped them of their ethnicity and heritage in order to win an argument, and then called me racist. I admit, initially this seemed a little inappropriate.

But I am in the beginning stages of my Journey to Left Wing Enlightenment. I’m still learning the rules.

I’m still learning about myself.

But, really, it’s because he’s black.

But, actually, it’s the blackness.

I thought I opposed Obama because he stole money from middle class Americans and gave it to banks, auto companies, unions, and green energy schemes. I thought I opposed Obama because he hates the free market but is the worst crony capitalist to ever sit in the White House. I thought I opposed him because he pretends to be a fighter for the poor, but he’s actually only interested in fighting for his pals on K-Street and Wall Street, which is why his administration is stuffed with lobbyists he vowed he’d never hire. That’s also why he handed out over one thousand waivers to his donors, exempting them from the requirements of Obamacare.

But, nah, I just hate his skin color.

But, never mind, it’s all about his ethnicity.

I’d totally love all of these things if only they happened under a white administration. Seriously. Remember Clinton? Conservatives wanted to criticize him for a thing or two, but we were all like, “hey, it’s cool guys: he’s white.”

I am a racist. There’s no other explanation.

378 Responses to I am a racist